Since Cyclone Idai devastated Mozambique, Anita Salomone has been living in fear.

Since Cyclone Idai devastated Mozambique, Anita Salomone has been living in fear. She was at home when the floods came, the water entered her house with fierce force leaving Anita and her family trapped like zoo animals in a cage. “The water came fast. It quickly reached the level of my neck. My children had to crawl on top of our dining table. We were waiting to be rescued by boats for hours. It was a night mare,” she remembers. 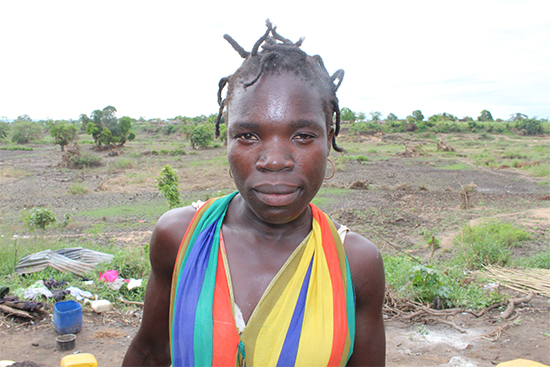 In Mozambique, more than 240,000 houses have been damaged or completely destroyed. In Nhamatanda, the district Anita’s family calls home, over 1,400 families lost their houses. Right after the storm calmed down, many of them had no choice but trying to find shelter in schools, churches or community buildings.

Now, four weeks after Idai had torn Anita’s and many more people’s lives apart, the Government of Mozambique assigned new plots of property to families in highland areas – land which is better located and will provide means to better protect people and their belongings in the event of future flooding’s. But how should people build new homes without any materials or tools? This where CARE comes in.

“We were told to leave the school we were staying in because lessons had to restart last week,” explains Anita. “At first I was afraid it would mean I would have to go back to my village where nothing is left. But now, thanks to the donation of materials from CARE, I will build a tent on my new land and start a new life step by step”, she says.

To date, CARE has reached almost 22,000 people with clean water, food and tarpaulins. In Nhamatanda, CARE donated 225 family tents to Anita’s community. CARE is working with the Government of Mozambique and other aid agencies to assist communities by providing emergency household items such as tarpaulins, blankets, buckets and mosquito nets.

“We have been waiting to be able to help our people for weeks,” says Agostinho Domingos, Chief of the Locality. “We resettled them to a safe place and with this donation they are empowered to restart their lives on their own. On behalf of the government, we want to express our relief, and thank CARE for the support.”

For Anita, all that counts is looking into the future. She does not want to return back to her community because she fears that floods could enter her house again – a fear that might last longer than the time she will need to build a new home for her family.