CARE distributes food for more than 2,000 families in Buzi

Four weeks ago, Guara Guara, a village in the district of Buzi, Mozambique had been submerged after a river burst its banks causing catastrophic floodwater in the aftermath of Cyclone Idai. Since then, more than 190,000 people living in this district have been engulfed by water. Road access has been cut off for weeks. The full destruction is slowly emerging while flood waters are still receding. According to the Government of Mozambique, more than one million people in Mozambique are in need of humanitarian assistance. Thousands of families have been in desperate need of food.

To date, CARE has delivered aid including food, water and tarpaulins to nearly 22,000 people. In Guara Guara, a village in the district of Buzi, CARE’s emergency staff has worked around the clock to reach more than 2,000 families with rice, peas and oil within just two days. In the coming weeks, CARE is planning to scale-up its response with the aim to deliver urgently needed help to more than 300,000 people. 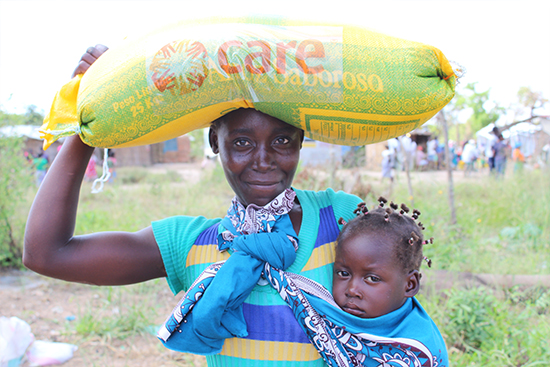 Linda Nduna, 22, has not eaten a proper meal for quite a while. She has been waiting for food for more than two weeks, as her livelihoods were washed away with the storm. Since the cyclone hit, Linda collected wild fruits and leaves to feed her four children. She was worried that they might get sick, but she had no other choice: “I went to my fields when the water receded to find rotten maize – rotten maize and wild fruits is what we have been eating. I am very happy for this help and looking forward to finally cook a proper meal for my children again”, says Linda, with her little two years’ child on her back named Elvina Alberto. 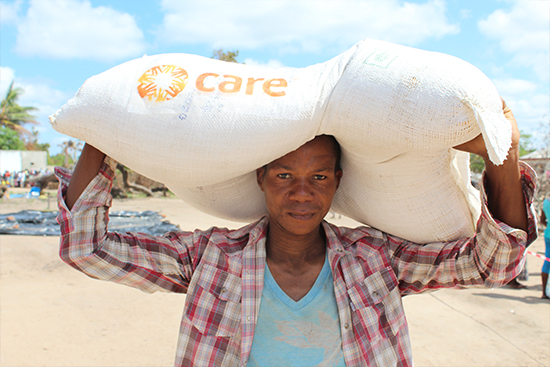 José Estavão, 32, lives with tree children and his wife in Guara Guara village, in Buzi district. He and his wife have always worked hard on their field to feed their children. All of their crops and their food stock has been swept away by raging floods. “I could always harvest enough to feed my children and sell some of it at the local market, but the cyclone destroyed my crops. There is nothing left. Over the past two weeks, we went to sleep with an empty stomach. My children are extremely week because they have not eaten enough food. I didn’t expect support, but I am so thankful that I have received oil, rice and peas today.” 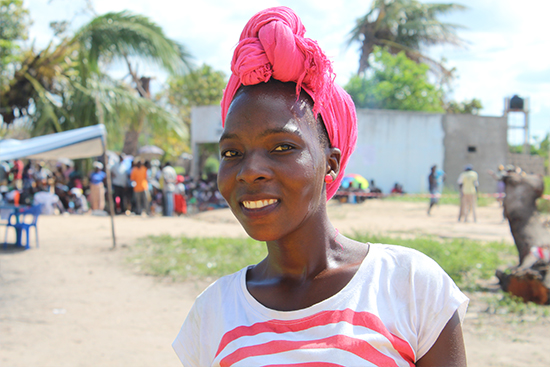 Maria Fernando, 22, has volunteered to support her community in Guara Guara. For her, it is an honour to work for CARE. “All of the communities have to work together to identify the most vulnerbale people after cyclone Idai has hit our country. We have prioritized people with disabilities, the elderly, as well as breastfeeding women and mothers. I am happy that I am able to help my community and it is rewarding for me to see people here receiving food after one month without food.” 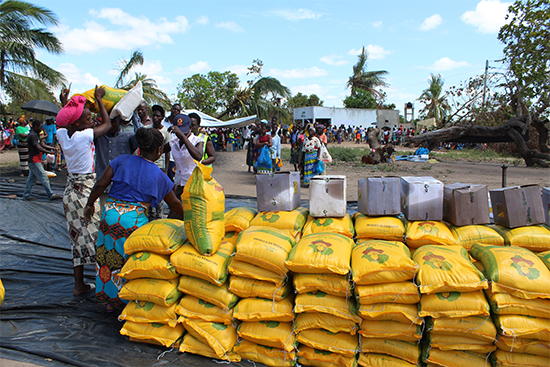 CARE staff distributing food in the district of Buzi, in the centre of Mozambique. Cyclone Idai destroyed houses, schools, health centres and other infrastructure. The cyclone also demolished crops like maize, rice and ground nuts, affecting the first of this year’s harvests.